Job Cost Accounting
Actual incurred costs per Job are usually calculated, by spreadsheets, outside the General Ledger setup of the organization for:

All other organizations, selling on contract to the federal government, use Job Cost Accounting. The General Ledger setup uses a special Chart of Accounts, unallowable/unbillable accounts, and a separate Job for each customer-award. Job Cost Accounting records and reports transactions in the General Ledger, by Job. Often, one Job equals one sales contract; however, one sales contract might require multiple Jobs. Direct costs and allocated indirect expenses come directly from the General Ledger, for each Job – not just for the organization as a whole. Net profit is reported for each Job, not just company-wide. Transactions are easily recorded as direct or allocated by Job with a correct General Ledger setup.

Guidance for proper setup of Job Cost Accounting eases this requirement for a DCAA-approved Accounting System. 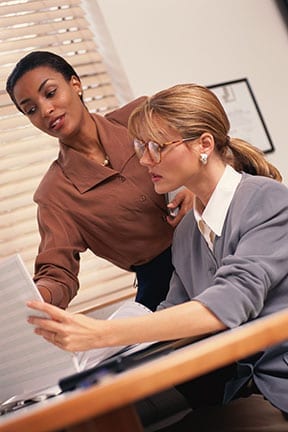 Chart of Accounts
The Chart of Accounts (CoA), or Account Listing, shows the name of each type of cost. With certain exceptions, the U.S. Government (USG) is not concerned with Balance Sheet accounts (Assets, Liabilities, and Equity) or Income accounts. Guidance in creating or editing the CoA focuses on Cost of Goods and Services Sold (i.e., direct costs) and Expenses (i.e., accounts that form an indirect pool, which is allocated among Jobs by a base).

A compliant General Ledger setup begins with the CoA. The CoA is best organized with growth in mind, grouping similar accounts together. Even if only one pool contains both employee fringe benefits and payroll-related (employer paid) taxes, circumstances might change with company growth; splitting one pool into two will be easier, if fringe benefit accounts are listed together in the CoA and, separately, payroll-related taxes accounts are listed together. Organize facilities Expense accounts together, if they are (or might become) a separate pool from other General and Administrative (G&A) accounts. Additional suggestions, at the beginning of configuring or reconfiguring the General Ledger setup, reduce future CoA changes and aid changes in the indirect rate structure.

In addition to Cost of Goods and Services Sold and Expenses, a DCAA audit expects segregation of Unallowables, which accounts move to the bottom of the CoA. General Ledger reports must show allowable net profit, by Job, with Unallowable accounts reducing profit. Unallowable Expenses (See the Federal Acquisition Regulations, Part 31.) are excluded from indirect pools, so must be clearly quantified. Unallowable Cost of Goods and Services Sold are included in bases for indirect rate calculations, and absorb their fair share of indirect expenses – though both the base costs and their absorbed Expenses are unallowable. Unallowable direct costs must be clearly quantified. A separate section for Unallowable accounts shows at the bottom of the CoA.

The CoA contains accounts that might seem duplicated. For example, Direct Labor for hands-on work on a Job is separate from G&A Labor for work that benefits the organization as a whole (such as accounting). Each Labor account holds different types of costs; both are required in the CoA. Similarly labeled transactions with different beneficiaries need separate accounts during General Ledger setup. Shipping, Professional Fees, and other accounts are often in two accounts – one for direct work on a Job and one for the organization as a whole. Written policies and procedures plus source documents, which trigger the recording of transactions, show that choosing the correct account are consistent in “like circumstances.”